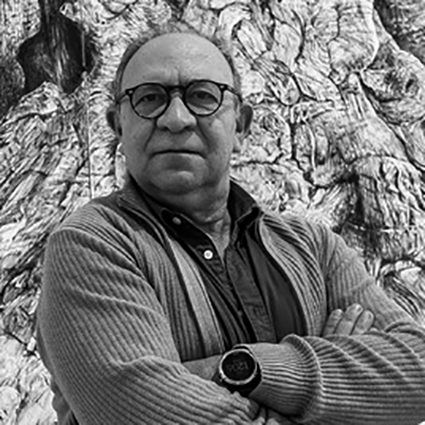 José María Lillo was born in Cuenca in November 1956, nine years before opening the Abstract Art Museum of Las Casas Colgadas in Cuenca. At the age of 15, he participated in his first collective exhibition where Fernando Zóbel liked his work, and from that, they began a relationship of learning and friendship until Zóbel’s death. He lives and creates bonds of friendship with Gustavo Torner, Gerardo Rueda, José Guerrero, and other Spanish abstraction artists.

In 1980 he held his first solo show in Madrid, to which he was selected to participate in the “First Hall of 16” at the Museum of Spanish Contemporary Art and in Preliminary an exhibition that showed the most significant Spanish artists, and until today he has not stopped regularly exhibiting his work, mainly in Spain and the United States.
He is a Professor of Painting at the Faculty of Fine Arts of Cuenca, of which he has been Dean and Director of the Art Department today.